A Down Under Coincidence

Sleet lashed against the beveled windows of the Wellesley Club bar as my wife and I settled into leather chairs next to a roaring fire.  I was knackered from my efforts on the rugby pitch earlier and was happy to have found this quiet shelter after a challenging, but immensely enjoyable, week in Wellington, New Zealand.

In November 2006, we had journeyed to this far side of the world with the Colorado ‘Ol Pokes, a harlequin team of mountain men and their significant others, to participate in the sixteenth international Golden Oldies Rugby Tournament.  Nancy and I are lowlanders from Kansas City, but the Pokes have welcomed us on these international forays that are held every two years alternating between countries in the northern and southern hemispheres.

Dating back to 1891, the Wellesley is housed in an historic brick and marble building on a secluded street near Wellington Harbor.  Stag heads and caricatures of old Wellington society grace the wood-paneled walls.  It’s the kind of place where the bartenders wear starched white vests, call women ‘madam’ and men ‘gentlemen,’ and serve wine from carafes.  Asking for a second helping of crumpets, Nancy and I felt like characters in a P.G. Wodehouse novel.  It’s not a rugby club, but it counts former All Blacks among its illustrious members.

By 5 p.m. the rain had stopped and it was time to head back to our hotel.  On the walk along the harbor we came upon bronze plaques set in remembrance of the American 2nd Marine Division which had used Wellington as a staging point for the Pacific battles of World War II.  Seeing the eagle, globe and anchor emblem in that unlikely setting reminded me that it was November 10, the Marine Corps’ birthday.  My record was about to be broken—I hadn’t missed gathering with other Marines to celebrate the anniversary in more than thirty years, beginning with my days as a young lieutenant at Quantico.

I needn’t have worried, however, because by an extraordinary coincidence the Ball came to us.  That evening as Nancy and I left our hotel room for the final party of the rugby tournament, we were amazed to encounter two American Marines in the hallway in their “dress blues”.  They told us they were on their way to the birthday celebration being held in our hotel’s ballroom. The Marine detachment from the American embassy was hosting the formal bash for other foreign embassies and their military personnel. 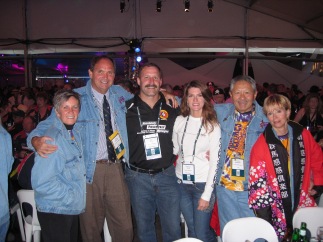 Now, the Golden Oldies Rugby festival finale is not a shindig to be missed.  The Wellington extravaganza, held under the largest tent ever erected in New Zealand, would have multiple band stages, Maori dancers, tons of food and drink and the chance to swap stories and jerseys with over a thousand ruggers from every corner of the world.  But I wasn’t about to let the Corps’ 231st Birthday celebration pass me by either; not when it was going on right down the hall from our hotel room.

I introduced myself to Gunnery Sergeant James Sheppard, who was in charge of the event, and, after verifying my Leatherneck pedigree, he graciously invited us to attend later that evening.  Nancy and I went to the rugby gala on the wharf—it was as spectacular as promised—then returned to the hotel just before midnight to find the birthday ball in full swing.  True to his word, the gunny ushered us in and for the next few hours we shared cake and champagne with a whole new set of extraordinary people.

As has happened so many times in my long rugby career—which began when I was in the Marines—it was another experience to savor.

This entry was posted in Uncategorized. Bookmark the permalink.

One response to “A Down Under Coincidence”